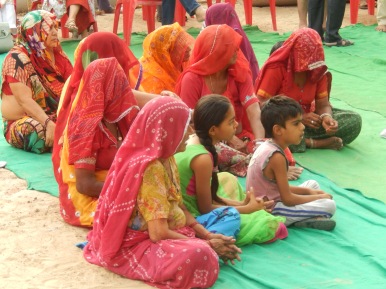 As my taxi changes gear from highway to village-dirt-lane, a street dog barking furiously runs along for it finds a foreign moving object in its neighbourhood in this early hour of the day. We outdo the dog by a long way, and I could hear strains of music wafting in through morning stillness. I ask the driver to head in that melodic-way. Musicians belong to Islāmic faith singing Hindu bhajans in the courtyard of quaint Hanuman Dhora temple at dawn opens the festival. Villagers sitting cross-legged on the blanket are taking in the bliss. White-clothed and turbaned elders walk in at their pace while head-covered women in bright red Rajasthani sarees gather in a corner on the blanket. A few SUVs to my left and camels inside house walls to my right. Desert sand underneath my feet and peacocks trot at higher elevations looking for breakfast, this hour is indeed sublime ! 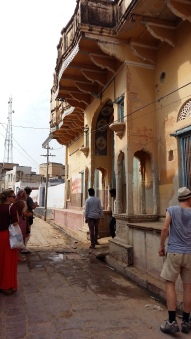 A village 160 miles north-west of Jaipur in Rajasthan is hosting the 6th edition of Shekhawati Utsav, organized by Jaipur Virasat Founndation that works to keep and promote traditional art forms of the state. The festival runs for 2 days, staging 200 artists from various regions and attracts a few thousand crowd to this remote hamlet, mostly from nearby villages and also a handful of die-hard fans from abroad.

We break for tea and simple refreshments at a local temple-hall. I meet up with a group who come from US and various European countries. “Marc and I chanced upon this festival last year and this year we are here to play. Yes, we were suggested city gigs but we settled for this unique village one” says Markus from Germany. In a first, this edition would feature a non-Rajasthani band in Marc Sinan and Iva Bittova. Energized by tea and with the help of a local guide, we stroll through the maze of lanes for local attractions such as temples and century old charming havelis that are painted with frescos, belonged to wealthy merchants of yesteryear. 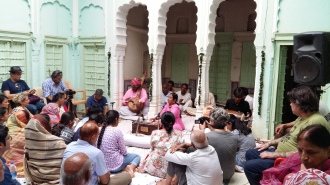 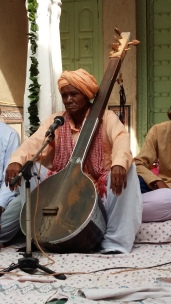 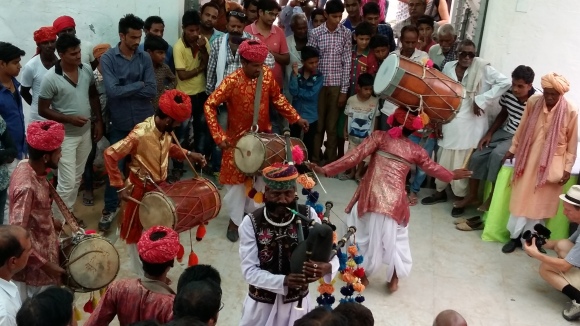 I enter Patwari ki Haveli, an exquisite heritage building of Momasar, for ‘Music in the afternoon’. A group of women sing welcome-songs at the massive door. An array of activities in the courtyard include men spinning yarn from drop-spindle, rope-making demonstration and young students of wood-craft display their creative works. “This reflects the motive of our Foundation – preserve and encourage tradition in all forms” says Vinod Joshi, Director of JVF and the force behind this festival, which also serves him as a pay-back to his birth place. Along the wall, Kathodi performers present a unique image as two men blow into a mouth-piece of a vertical wind instrument, a man on scraper and another rubs a thin metal rod placed over a brass plate to produce the drone effect. “They live in the forest and make their own musical instruments” says Joshi. A flight of stairs in the haveli brings up a compact hall that is open to the skies where the 80 year young Safi Mohammed sings with gusto often tossing and turning the tanpura on his hand, more than strumming on it.

A quick stop for snacks at the temple hall and as the light starts to fade, we head to a farm. Though it is dark, I could get a sense of the expanse of the place and feel my respiratory system is more at ease now. As the wind blows across under starry sky, a dimly lit make-shift platform offers space for more folk art traditions. A red-turbaned, white dhoti clad man with anklets thumps his feet and waves his arms around to the beats and singing of two men playing on maante drum, a large clay-pot – their silhouette leave a surreal feel. While Marc and Iva sounds are a novelty in village-ears, the day ends at Taal Maidan, an open-air ground, at midnight with “Kuchamani Khayal”, a folk-theatre tradition from the Nagaur region of Rajasthan and is very much on the decline. 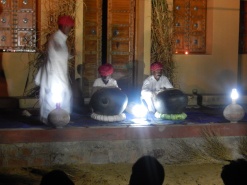 Curtain downs with a bang

Second day begins with ‘Baal Mela‘ that features a few thousand young boys and girls from 13 different schools in the village to get them re-acquainted to their rich roots and help them understand that tradition and progress could go hand in hand. “This is very crucial for the future of what we are now involved in” says Joshi, who sounds keen on covering the entire spectrum in his quest. The children get to see artists who do not make it to center stage this year, yet perform amid children’s’ competitions and workshops.

On the grand finale evening, hoards of villagers stream in one direction, young girls giggle their way in, boys bond with arms around shoulders while women look in unwind-mode with their day chores done with. Now my taxi struggles its way through this mass in this otherwise no traffic zone. As I reach brightly lit Taal Maidan, the place is buzzing, children play in sand chasing each other, flies and bugs have a field day around high wattage lamps and even crawl on people, excited in their sudden-found-illuminated-lives. The stage that exudes Rajasthani decor is all set for the show. An endless kaleidoscope of folk forms that include Dhol-thali, Kalbeliya, Gair, Bhapang, Kachhigodi, Sahariya Swang dance unfold on front that last well into the wee hours.

Though a comfortable hotel stay is some 25 miles away, the festival affords to experience folk art at its provenance. While Langa and Manganiar musicians are hot invitees on world stage, JVF aims to bring the world to their homes. 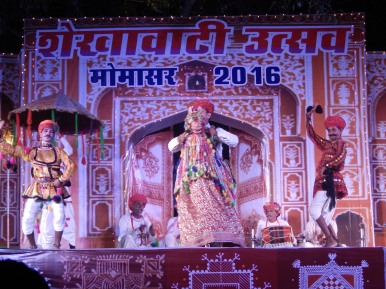 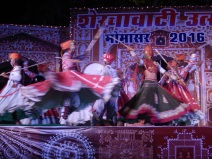 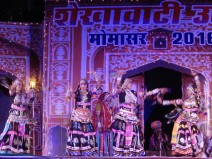 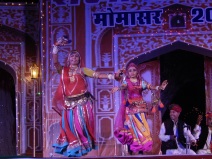 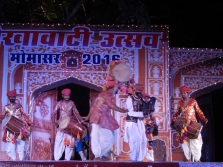 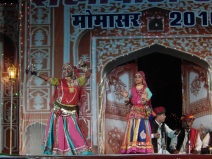 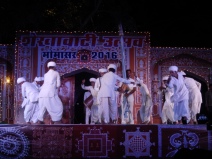 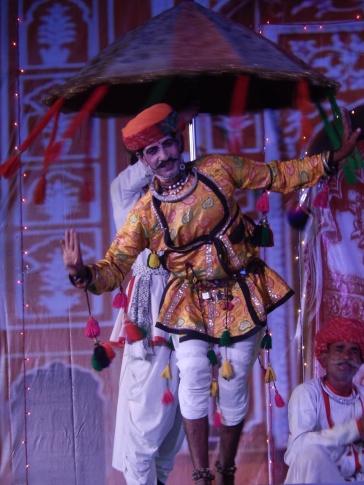 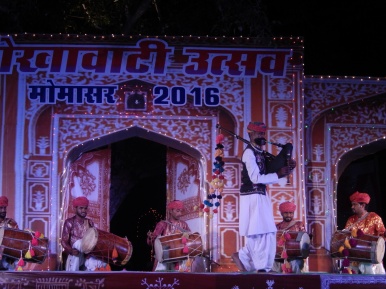